I’m not sure I’ll stick all the way through this, but Flower Boy Ramyun Shop is both fun where it’s trying to be funny, and intriguing where it’s starting to line up it’s conflicts…

Of course, you can blame DramaBeans.com reviews for my watching it at all–I wasn’t interested initially. But they drew comparisons to Hello My Teacher (and it’s quite apt, I’d say this is like a reboot) and then were enthusiastic about some of the viewpoint-contrasts between the main characters, and I needed to check it out.

And do you see that? Yes, characterizing…bracelets.

With a sort of childish blocky look, in fact, which I think is to cue us to the fact that he’s actually underage while all the footage before a certain point makes it seem as though he’s quite independant and adult. (Maybe not mature, but acting under his own power.)

He’s pairing them with suit jackets and sweaters and school uniform, all themselves with severe lines such a slim frame carries off so well. It adds a playful note necessary to really perceive him correctly.

Of course, he also has to have his cadre of Flower Boy lackeys. I don’t know if they’ll be the Beauties of the ramyun shop (long-haired one, yes, plz) or if that’s going to be more a One-Man-Show (if this is the straighten-up tactic of his father[‘s secretary] I will be so pleased.

I like that already the shop has a certain honor-code and reverence, that it’s a neutral ground for the gangs and has a heavy significance to both the heroine and her dad.

I also like that they seem to be going to the extra effort of finding new ways to film familiar settings.

I don’t have high hopes for this show, exactly, but it’s a fun thing to have in my queue of things to watch when I need something lighter. And I’m open to changing my mind, too.

I’ve been needing a fluff drama. I mean, nevermind the four I need to finish already, they turned not-fluff and require actual…attention. Mental energy.

Also, the boy’s a chaebol, he’ll be in SUITS. 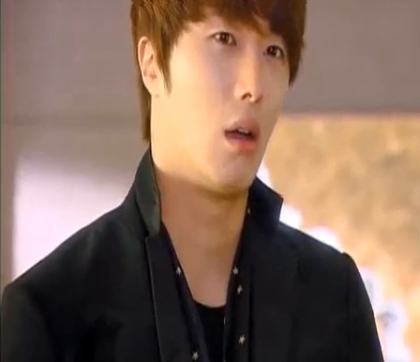 Which are whimsically accessorized, though I haven’t got a good shot of that yet. To help us get a bead on his age, which has been spoiled for me, but not the heroine and not outright by the show yet…

This is another one I was sold on by the recaps up at DramaBeans.com!

Apparently, the opening is straight out of Biscuit Teacher, Star Candy, and the structure has a lot of similarities. While the actor’s mannerisms in this first episode are a bit on the nose, that set up is one RIFE with actual interesting conflict, and was one of my favorites of the dramas that aren’t of Coffee Prince league.